Vectorvault moved to the WordPress platform

Back in 2007, I was aware of blogs, but unaware of how to build or manage one. Luckily for me, I met someone who changed the game by teaching me. He helped me to understand a few things about how blogs worked and how Google identified content.
A great deal of him is in Vectorvault’s DNA.
He introduced me to WordPress and I’ve never looked back.
First I designed a few conceptual layouts: 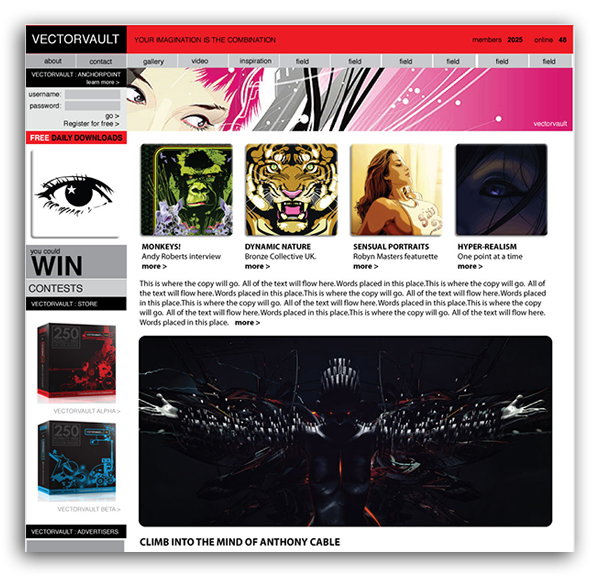 Eventually, I ended up with a design that worked for me at the time. All I needed now was content. So I established a few social media identities and began to explore the world of vector art. I sent messages and built friendships with both artists that I admired and people who I could see required a helping hand. This was my chance to make a difference. This was the purpose that Vectorvault was missing. 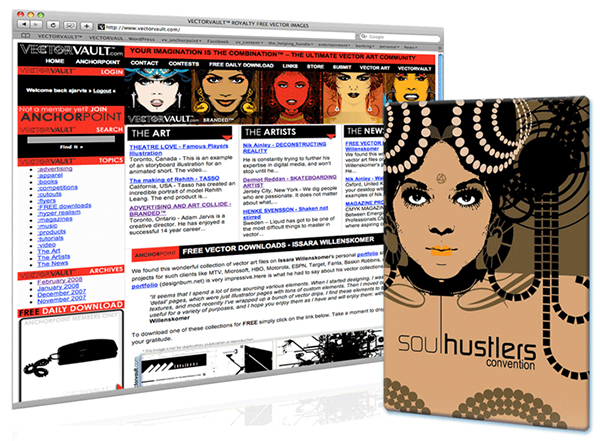 I started with a few interviews. I wanted to get to know the designers and artists behind this movement. I wanted to present them as real people.
(2007 – *be kind)

From the very start of the blog, by far Vectorvault’s greatest supporter has been Ansley Greene. She did a couple of great Vectorvault interviews for us: TASSO, Milk, OG Abel and Superfex.
She has been a beacon for this brand. And an active participant. Thanks Ansley. We’re proud of you.

I even hired an Intern

Justin was great, but after the second month, I realized I was cutting him a larger cheque than mine. I was sadly forced to cut our time a few weeks short. It has always been my dream to pass on what I have learned from this project. The universe made it financially challenging for me to do it properly. Thanks for your help Justin.

In order for me to properly promote my brand, I needed to use it. So I decided to feature vector designs that I had created using Vectorvault vectors.
Soon this small brand was building something far more important than a fortune: a reputation.

It started to generate design business

My phone began to ring. A delightful byproduct that I welcomed. Not only did I have an organized collection of vector images. I knew where everything was. This made me even faster. When a client briefed me on a project, I could visualize where all of the ingredients were located before I even started. It made my life easier. And more profitable.

I wanted Vectorvault to get better over time so:

Anything to improve it’s value.
Justin helped to build these:

I expanded the brand

In an attempt to convert freebie-seekers into customers, I built new satellite websites designed to channel traffic back to the parent brand. By getting visitors to register to acquire free vector samples, the Vectorvault mailing list would continue to populate. Adding more opted-in individuals daily, who had an interest in vector art. More connections to speak to. Growth.

Now I had a place to gather up the best content and products for the month. One more touchpoint.

Each day, the system would cycle in a new free vector that was only available to individuals who registered with the community. It would also show you which vector you missed yesterday and which vector was coming the day after. This built momentum. But did little to increase sales.

Soon, my registrations climbed to over 23 thousand members. Then slowly started to taper off. The free giveaways eventually became too problematic to maintain and presented security concerns.