This animation is related to the wall we made for 8goals8walls.

8goals-8walls is a international art project in which the eight MDGs are central. This art project is financially supported by NCDO. The exhibition will take place from May 15 to June 17 in front of the DRU Fabriek, Ulft, the Netherlands and later this year in Tunis, Tunisia.

END_OF_DOCUMENT_TOKEN_TO_BE_REPLACED

Launched across MTVs international network of 63 channels on 8 November 2010, the idents constituted the third phase of MTVs POP x 1000% international refresh, first rolled-out in July 2009, and progressed from expressing human emotions to exploring the senses  touch, sight, hearing, smell, taste  with the added twist of 55DSLs intriguing 5.5th sense, the less-explored human sense of intuition, featured on a sixth t-shirt.

In identifying the cream of design talent from across the world, MTV and 55DSL engaged the talents of international artists Alex Trochut (touch), Ilovedust (sight), James Roper (hearing), Tei (smell), Yué Wu (taste), and Zeloot (intuition), to each create a t-shirt design inspired by one of the human senses. Each of the t-shirts featured a unique graphic and was created using an innovative method chosen by its designer to represent the sense in their own individual, tongue-in-cheek way.

Taking the creative process one step further, each artist was paired with a motion design studio  selected from some of the worlds most innovative and cutting edge studios  including Universal Everything, Physalia and Digital District, to turn the original artworks into five unique 30-second short films, each informed by one of the senses.

END_OF_DOCUMENT_TOKEN_TO_BE_REPLACED

This video from To-Fu motion graphics design in Japan, reminds us of a few (29) ways to stay creative everyday.

END_OF_DOCUMENT_TOKEN_TO_BE_REPLACED

Mike Roush is an animator living in Southern California with his dog Riley. He’s a talented son of a gun with a a flare for character design.

MusicBox from mike roush on Vimeo.

“This is a short I did for 5 second day at Titmouse inc. Justin Ridge did the music and I did the animation.”
Dig it?
Let the artist know how you feel:
mikeroush.com
Follow him on Tumblr (I do). 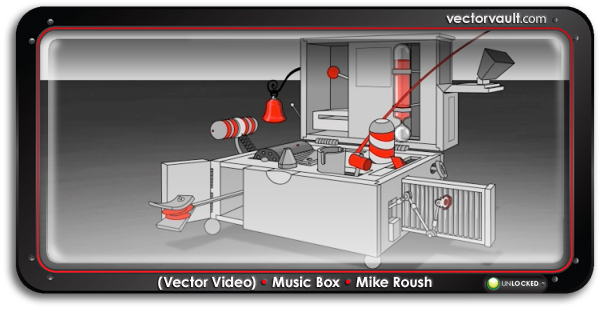 Congrats. You have found the fourth free vector download of 8 hidden in the July 2011 newsletter. To claim it, simply cut and paste the coupon code below. Click on the product page and enter the coupon code at the checkout to get it for free.

That’s not all of them. Feel like going on a little treasure hunt? Look through the posts featured in the July 2011 Vectorvault Newsletter for the other 7.

This is a series done for Riverlife, a nonprofit advocacy/guiding group for the redevelopment of the riverfronts in Pittsburgh. I live about 6 blocks from one of those rivers and in the evening, spring through fall, you can often find the wife and I taking long walks along the riverfront trails that are part of that redevelopment. So I jumped at the chance when Riverlife contacted me to do a series of animations.

This was made with After Effects and SoundForge.

Credits:
Produced by Riverlife – riverlifepgh.org
Music by Colonizing the Cosmos – colonizingthecosmos.com
Design, Direction, Animation and Sound by me.

FITC, the Design & Technology events company celebrated their 10th annual flagship event in Toronto this year and MK12 produced a short title film for the occasion.

The FITC Toronto 2011 festival took place May 2nd-4th 2011 with over 1100 attendees and featured over 75 design & technology presenters including MK12s own Ben Radatz and Shaun Hamontree, as well as legendary Kyle Cooper and many others. See the event details at FITC.ca

Video was created by MK12
Cel-frame animation by T.J. Fuller

END_OF_DOCUMENT_TOKEN_TO_BE_REPLACED

Porter is a great brand. I’m not just saying that because of my love for Toronto. Porter has redefined air travel and the service that surrounds it with a touch of class. The vector based ad campaign is the cherry on top.

Porter Airlines  The only way to fly