One of the reasons that our vector illustrations are a refreshing alternative, is the fact that we merge several elements to come up with unique styles. We hit the streets with our sketchbooks. Drawing pretty girls, photographing buildings and even pulling typography from street signs. 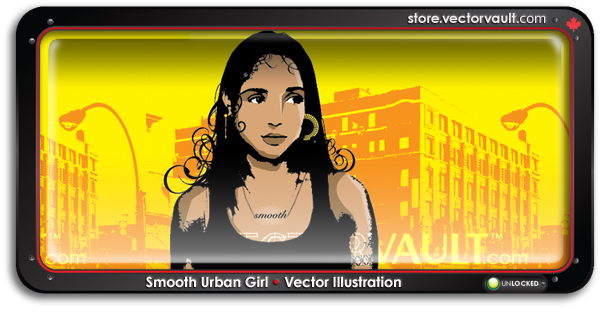 We love finding those ingredients. But by converting them into mathematical vectors, we pass on the flexibility to you. With just a few clicks you can adapt colours, move elements and place this young lady in the right context for your purposes. But the best part is, you save time. Time is money. And money (although not the most important thing in life) makes the world go round. We want to keep more of it in your pocket.

Take a look for yourself

Bookmark us a resource. You may not need us Today. But when you do need us. We will be here.

QUOTE OF THE DAY – Oscar Wilde

“Be yourself; everyone else is already taken.” ~ Oscar Wilde

Her necklace says it all. This chick has got a bucket of confidence and a sweet set of curls.
She’s just one of the many illustrations available at the Vectorvault : Store. make sure you bookmark it and visit often. It will be growing fast this year.

It’s not easy to capture the spirit of a city like New York. It’s a monster, with an ocean of sights, sounds, shapes and yes – even smells.

This vector collage is an attempt to create a snapshot of the “big city” using some of the elements from the VECTORVAULT URBAN collection. It’s called City Collage. You can learn more about it here.

Goldi Gold is an artist that caught our attention over a year ago. His sharp, distinct style is rooted in the music that he loves: Hip Hop. There is no doubt that Atlanta has been the launch pad for many Rap juggernauts, and by the looks of it it also serves as a home base for exciting visual artists as well.
Goldi is actively marketing his work online and has built a reputation as an illustrator on the hustle.

Goldi’s style is simple to digest, and easy to connect with. His portraits are based on music heavy weights and strong personalities. He doesn’t just like Hip Hop. He lives it. It is the fuel for much of his subject matter. We admire his passion.

“I go by the name GOLDI GOLD, born in raised in many areas in New Jersey, made powermoves to Atlanta during the seconding coming of hip hop in 94. During the day I do blue collar work to sustain my addiction of art. But at night i morph to a beast that murk heads with dirty digital graphics composed with ill color combos, graff inspired backgrounds and flipped subjects matters which are cloaked and projected to give people hip hop in another form. I incoprate all this in my part-time freelance illustrator/full time part owner clothing line(jungle45)/parttime artshow promoting steez. My motto”I want to put the ghost in the shell of computer graphic. I was doing vector art without even knowing it. I know I had the program streamline so I use to draw my images with think lines and streamline it, which trace over the lines automatically. but 1 day the streamline stop working so I had to use the pen tool. Oh! I dreaded useing the pen tool at first but it became second nature with practice and the more details I put in my pencil work the iller it would come after I was done computer illustrating it. It came to the point people question my pencil work because they thought I traced the photo. Then Blam!!!!! The pencil work than a greater appreciate often occur. clients Ive do most of the underground mixcd in Atlanta. Work comes and goes. If I had the list of people that actually came through with the ends for artwork my resume would be a beast!!!!”

Look out for this cat. He’s heading for something big. Respect.

He is available for freelance projects and welcomes feedback.