Bert Monroy is a modern master. We have followed his career for some time now. But it is this piece entitled “Damen” that in our humble opinion is the crown jewel of the Photoshop world. Take a look at this masterpiece here.

This is an incredible digital painting of a Chicago scene unveiled at Photoshop World in Miami on March 22, 2006.We were so inspired by the detail and realism of this piece that we could not believe that it was not a photo.It is a panorama of the Damen Station on the Blue Line of the Chicago Transit Authority. Adobe Illustrator was used for generating the majority of the basic shapes as well as all the buildings in the Chicago skyline.The rest was created in Photoshop. 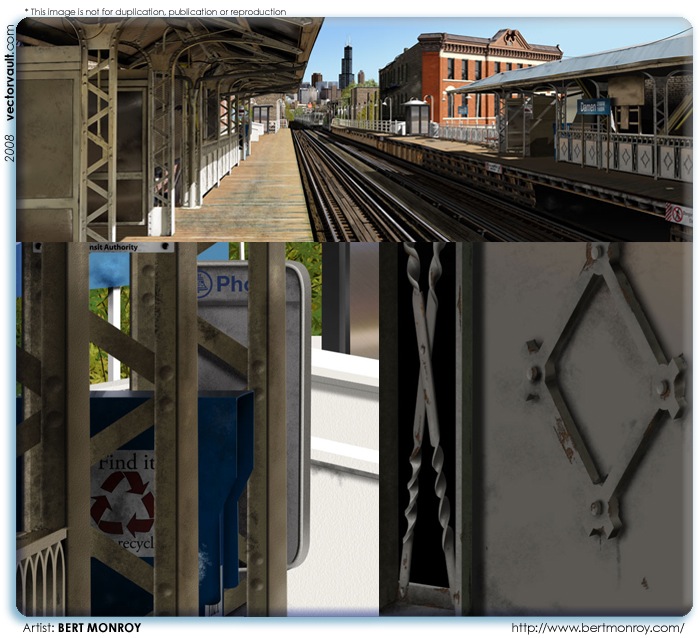 This is what Bert had to say about this piece:

“As a photo-realist painter, I have often been asked why I dont just take a photograph. Good question, when you consider my paintings look like photographs. Well, for one thing, Im not a photographer. To me, it is not the destination that is importantit is the journey.
The incredible challenge of recreating reality is my motivation.”
– Bert Monroy 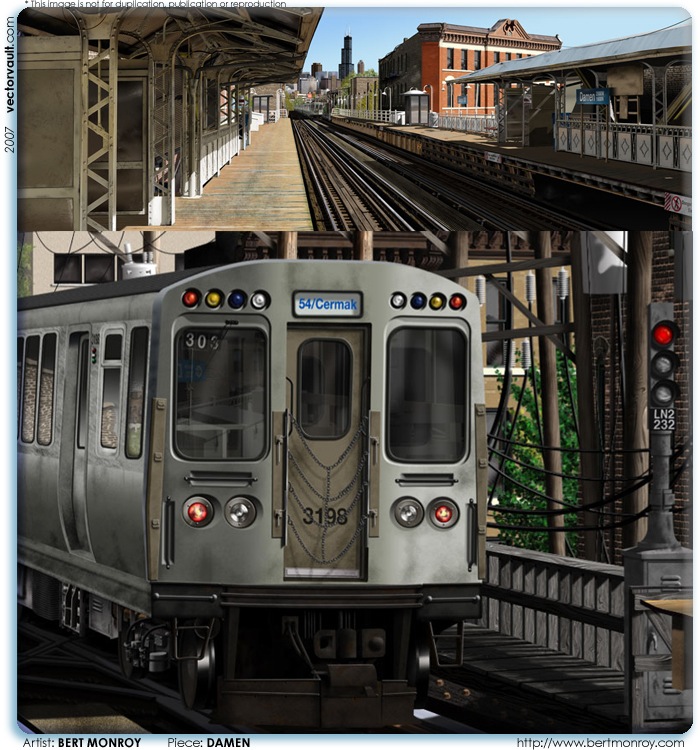 “I consider myself a Hyper-realist artist. I love to paint. I use the word paint for lack of a better word. My medium is actually light. I have a passion for making things happen on the screen. Finding a new way of doing something and finding a new room in my imagination is what I love about the work.”

__
Bert Monroy was born and raised in New York City where he spent 20 years in the advertising industry as an art director and creative director for various agencies as well as his own.
Upon discovering computers with the introduction of the Macintosh 128 in 1984, he embarked on a new digital career. He embraced the computer as an artistic medium and is considered one of the pioneers of digital art. Bert’s work has been seen in every major trade publication of the computer industry. His work has also been featured in scores of books which include Making Art on a Macintosh, The Photoshop WOW Book, The Illustrator WOW Book, The Art of Digital Painting, The Grey Book and The Photoshop A to Z in Japan.
His work has also been used to introduce many software products such as Photoshop, VideoWorks (predecessor to Director), PixelPaint, SoundCap and ImageStudio.
Bert was a founding partner in the New York firm Incredible Interactivity that was responsible for interactive multimedia presentations as early as 1986 before the terms had been coined. Presentations were created for such clients as General Motors, American Express and Knoll International.
Bert co-authored The Official Adobe Photoshop Handbook, which was the first book on Photoshop and the only one for almost two years. It won various awards. He also co-authoredAdobe Photoshop: A Visual Guide to the Mac which was published in 14 languages, Photoshop 4, published in Japan by Agosto and BNN, and Photoshop Channel CHOPS, co-authored with David Biedny and Nathan Moody, which concentrates on the most advanced features of the program not covered anywhere else. In 2000 he released his first solo book from New Riders called Bert Monroy: Photorealistic Techniques with Photoshop and Illustrator. It concentrates on the techniques he has established over the years in the creation of his fine art works. It is available at Amazon.com. His second solo book Photoshop Studio with Bert Monroy, also from New Riders, is another compilation of his techniques specifically for Photoshop 7.0. January 2004 saw the introduction of Commercial Photoshop with Bert Monroy, also from New Riders. It is also a compilation of techniques but deals with Bert’s commercial illustrations where photographs are sometimes used. This book deals with aspects of production that the two previous technique oriented books did not such as image retouching.
Bert is an accomplished teacher and lecturer who has served on the faculty of The School of Visual Arts (NYC), Center for Creative Imaging (ME), Dynamic Graphics Educational Foundation (IL), California College of Arts & Crafts (CA) and lectures at many other institutions and conferences around the world. He currently teaches at San Francisco State University. He teaches a long roster of corporate clients which includes Pixar Animations Studios. Bert is also a featured speaker at many world-wide conferences and is part of the Photoshop Dream Team of Photoshop World. Bert now lives in Berkeley, California. He continues to serve his installed base of clients which include Apple Computer, Adobe Systems, Pioneer Electronics, Fujitsu, SONY, AT&T, Chevron and American Express. Bert has also done a considerable amount of film work for Industrial Light & Magic, Pacific Data Images and R/Greenberg Assoc.
Bert has appeared in countless television and radio shows around the world. Since May of 2001, Bert has been a regular guest on the G4/TechTV channel show The Screen Savers. He appears every month to share tips and techniques.
In 2004, Bert was inducted into the Photoshop Hall of Fame.
source: (bertmonroy.com)
contact