In my opinion Conan the Barbarian (1982) is one of the best movies ever made. What’s that – you laugh?
With the release of the new trailer of the 3D remake, I can’t help but to say:

“Why Hollywood? Have you run outta ideas? Every TV show and successful movie under the sun has been redone with mediocre effort. *And just a side note – In two years, 3D cinema will be about as cool as “rollerblades”. You don’t have to do them all in 3D. Take it back a notch.”

The original Conan is a cult gem. One that should be revisited not remade.

Based on the genius of Frank Franzetta‘s artwork, the character of Conan is brought to life by Arnold Schwarzenegger in his prime.
The screenplay was written by Oliver Stone and produced by Dino De Laurentiis. Not so funny anymore is it?
Continue reading…

This movie was “pre-CGI” and post “Ten Commandments-style epic”. It paved the way for movies like the Lord of the Rings and sent Arnold on a path to become Governator. If only we could travel back in time to terminate those dreams. I joke.
This is a quest. A lonely quest filled with danger. Fuelled by a powerful desire for revenge for the death of his parents and people. Conan pushes the wheel of pain for 20 years until the day that he is unleashed on a path to his nemesis: Thulsa Doom.
Solid script. Amazing performances. Killer Soundtrack. Impossible to look away from.
This movie will grab you and take you to it’s magnificent fruition.
Soundtrack:
The music by Basil Poledouris is among the greatest movie scores ever recorded. It captures the pain, darkness, loneliness and glory of battle.
Forget the Black Eyed Peas on your iPod at the gym. Put this soundtrack on repeat and hit the weights. You’ll see what I’m talking about. Epic soundscapes to match the visuals. 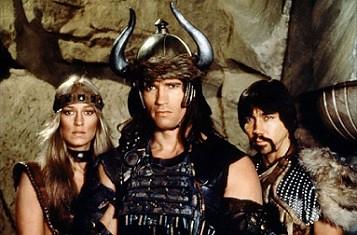 The Villians:
Thulsa Doom is played by James Earl Jones. Remember him? He played a beloved little character named Darth Vader. He is absolutely mesmerizing.
When he sets his two henchmen off the chain, things get crazy.

The sidekick:
Subotai is the ultimate wingman. A thief who defines friendship and loyalty.
The Wizard and Narrator:
Played by the legendary Mako as the chronicle. He brings humour and colour to the story.
The Heroine:
Valeria, played by Sandahl Bergman is no damsel in distress. She is the kind of woman that young boys read about in Heavy Metal Magazine. She is dangerous and beautiful. Her character tempers the story with love and sorrow. And that’s another great layer to this movie. It’s the love story. Really romantic storyline (if you call sword fighting with an Amazon romantic, I suppose).

Watch it. Buy it.
So that’s why I dig this movie. If you have not seen it, please do, then come back and tell me what you think. If you disagree, let me know in the comment section.
Here is the movie online to watch. But in my opinion, if there was ever a movie to own. It’s this one.

: This is a violent movie. Not everybody’s “cup of tea” as they say.
So pop this on with discretion or date night could end quick. And if you want to sell it in, just tell your lady that there is a lotta sweaty muscles to look at. That sometimes works.
Don’t watch it in the office and if you are going to risk it, have some consideration and wear some headphones. And DO YOUR WORK. They ‘aint paying you to fool around so If you’re going to watch this, use it in the background, like when a TV is on and you’re not watching..

What does cinema have to do with vector illustration and design? Everything.
They may not inspire a work of vector art, but they will turn on parts of your brain.
I always feel creative and inspired when I watch this movie.
I just have one question:
What is the “Riddle of Steel“?