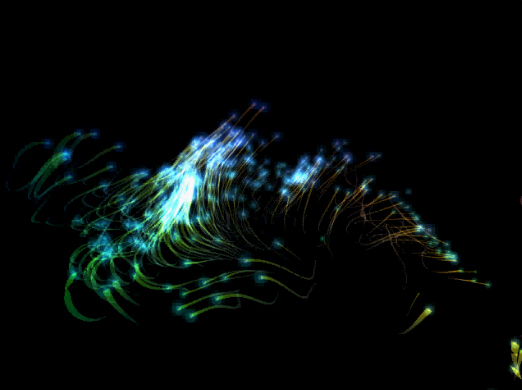 Using the Xbox Kinect to produce interactive art instead of logging 82 hours on a first person shooter game is commendable in of itself.
See what the outcome looks like here.
Developed using Cinder + OpenNI + NITE +Xbox Kinect

Did it just get hotter in here?

Shanghai, China
Exciting forms of creativity streaming out of the Far East these days. Magnificent t-shirts that I don’t understand – but love – and magazines that make your eyeballs hurt (in a good way).
It’s nice to see great vector art happening all over the world. If you are a vector illustrator and you have a Behance Portfolio, take a moment and join our group.
If you don’t have a Behance portfolio – you should. Trust me.
BAM!
POW! 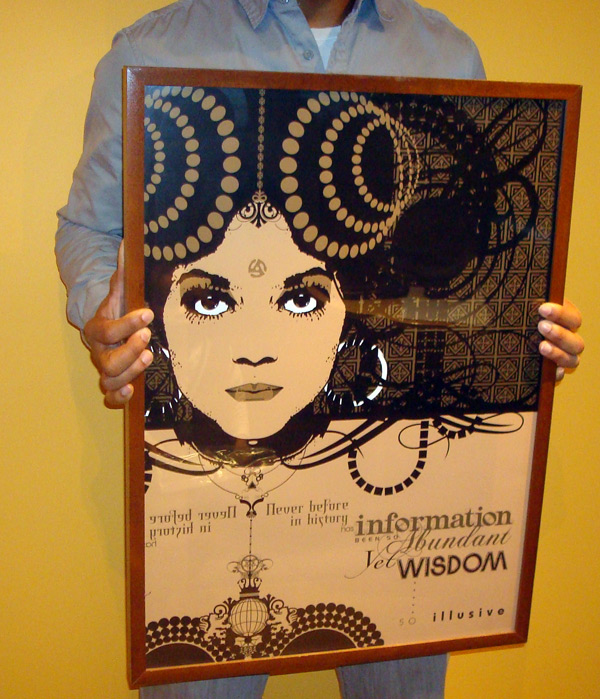 Vectorvault has officially launched a premium line of custom vector art prints. It’s premier release is a piece of vector art entitled simply: “Illusive Wisdom” by Adam Jarvis.
For over 16 years, Adam has struggled with a love affair between advertising, design, typography, vector illustration and art. And as each medium has blossomed over time, so too has his own style of expression. This new blend of vector illustration art is a perfect marriage of style, precision and emotion.
But unlike any of Adam’s previous collections, this design has the flexibility to adapt to your tastes. Take a moment to click on any of the images in this post to visit the unique product page that has been set up on the Vectorvault Store. You’ll not only be able to zoom in on some of the finer details of the art, but also change colors and sizes to suit your purpose. This adds a new dimension to shopping for art. One that we hope to pioneer in exciting new directions.

END_OF_DOCUMENT_TOKEN_TO_BE_REPLACED

Now a household name for his iconic take on the presidential visage, Shepard Fairey is uniquely suited for a career retrospective. And not just because of his Obama-fueled stardom. This year marks the 20th since the street artist/graphic designer/general renaissance man began printing his infamous “Andre the Giant has a Posse” stickers while a student at the Rhode Island School of Design. To mark the milestone, Boston’s Institute of Contemporary Art is presenting “Shepard Fairey: Supply and Demand,” Fairey’s first ever museum survey, which traces his oeuvre from 1989 through works he completed just weeks ago. The location is no accident either. Fairey admits a close connection to the town, as it was the first “real city” where he came to display his omnipresent street works.

Unlike many retrospectives, “Supply and Demand” is not organized chronologically. Since he regularly revisits certain concepts throughout the years, his work is separated into seven different thematic sections. The “Propaganda” portion, for instance, focuses on Fairey’s “Obey” theme, and includes plenty of works with Andre the Giant’s goofy mug. The “Music” section includes images of his biggest musical inspirations. In that room, portraits of Joe Strummer and Sid Vicious hang next to Tupac and Chuck D. But if there’s one underlying theme in the show, it’s exemplified by the last category, “Question Everything,” which subverts everything from Middle Eastern imagery to American currency. Running from this Friday through 16 August, the show is exclusively sponsored Levi’s, which couldn’t be more appropriate: the famed jeans company has championed Fairey since 2002, when they sponsored one of his group shows in Los Angeles.
We were lucky enough to get a preview of the exhibition, given by none other than the artist himself, who was dressed more GQ than DIY. He discussed myriad subjects, from the concept of street art to his creative process and post-Obama expectations. But since he explains it better than we can, we offer a particularly rough Rough Cut Video. Enjoy.
Shepard Fairey: Supply and Demand
6 February-16 August 2009
Institute of Contemporary Art Boston
100 Northern Avenue
Boston, MA 02210 map
+1 617 478 3100
Source: Coolhunting

Poland,
Freelance illustrator and filmmaker Zuzanna Krysik has done it again with this incredible series of posters called Capsule People. Take a moment to explore each well crafted illustration. They make me wonder just how much time I spend attached to a machine.

Dartmouth, Nova Scotia, Canada –
Wayne Forest is nothing short of a vector art master. His gradient mesh portraits are astounding.
This is a portrait of the one and only Halle Berry. It’s not an easy task to create a portrait of such a well known beauty, but Wayne has just nailed it.
Here are a few words from the artist:

“I reside in Dartmouth, Nova Scotia, the hidden Jemwell now that I have said it publicly, no I wasnt born here? Having lived in BC, AB, Man, Ont and NB, Nova Scotia is by far the place to be. What was the worst of the lot, well thats easy, Alberta, Im not in to dictators. However the annual bribes were nicenothing like getting ones own money back to subsides the corporations, what ever. Just one more note I have been in every part of Canada for the exception of Newfoundland, and that will change soon I hope. World traveling, I have been to most of Europe, South East Asia, Middle East, Africa and of course North America. Yep Albertas still on the bottom of the list:)
As for my interest in CG that goes quite a ways back but having no knowledge of what was possible or with what to use didn’t help. Having just finished up 21 years in the Canadian Military I am now moving towards learning everything possible in regards to CG. Adobe has really peaked my interest there for I was fortunate enough to get formal training in some of the products. Illustrator, Photoshop, Premiere and played with Indesign. However Quark covered that area nicely and I continue to maintain productive in it. Having taken training with Swift3D I have decided to go the next level and am presently doing a year long course within 3DS Max. It definitely has proven to be a great challenge having never worked with anything like it.”
-Wayne Forest

And just in case you still think that this is a photo: